Oh! I almost forgot to tell you about the trenches we visited while we were in Ypres. Quite a few WWI ghost soldiers were there as well. Just below Hill 60 are the trenches that were used by the allied units. They are – or were – filled with the ghosts of WWI Soldiers.

We started our tour by walking through a museum filled with WWI artifacts. Considering the building was located just below Hill 60, I wondered if they collected many these items from the area around them. Perhaps they were excavated from the land.

Inside the small museum were mannequins wearing uniforms, carrying weapons. Some were posed in odd positions, as if they were being treated for a missing limb or other war wound. It was a bit much.

Some rooms held German uniforms and those rooms held a darkness that was hard to shake, even long after we’d left the area. 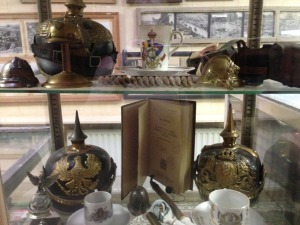 Once we found our way out to the trenches, it was truly like walking into a living cemetery.

Through my eyes I could see thousands of young boys still living life in the trenches. Ghost soldiers who had yet to leave. Many were wounded, some sat around smoking cigarettes. Most didn’t realize they were dead and were still fighting the war that had ended 100 years ago. No one knew how to get home.

The trenches are reinforced by metal sheets now, the sand bags that once held up the dirt walls are long gone. We wound along the trenched path, staying above ground most of the time. Another tourist was out there with us and she complained the whole time that she couldn’t breathe. She thought maybe she was having an asthma or anxiety attack. But that’s often the feeling people have when they’re surrounded by so many ghosts.The heaviness is almost unbearable.

When I felt I had a good understanding of how many soldiers were still there, I began to cross them over to the other side. In groups they went, sticking together as they had for the last century.

Often when I cross spirits over,  they begin to think of husbands and wives, children and other loved ones they miss. Those they know they’ll see again. But these boys were too young for wives. Their final thoughts before crossing over were of their mothers. These sweet boys missed their mothers.

After I’d crossed several thousand souls over that morning, we began to head back toward the museum, back the way we came in.

We ended up walking with the female tourist who had come in with us. “I don’t understand it,” she said as she looked around the trenches. “When we first got out here I could hardly breathe. I couldn’t even look across this area without cringing. There was just this thick, depressing energy here. I thought my asthma was acting up. But now that energy – it’s lifted. It’s light here, and -. I can breathe. I don’t know what happened.”

I smiled as we walked together. “I know what you mean.”

It’s always nice to have a little validation from those who can’t see what I see. Most can feel it when there’s a shift. And I love it when they comment on it.

Later that night we toured the Menin Gate and waited for The Last Post Ceremony to begin. We climbed the steps, studied the countless names on the walls. Servicemen from several countries and family members of the deceased soldiers began to line up with poppy wreaths in their hands, ready to place them at the gate. 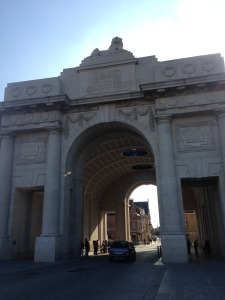 I have to say that I rarely cry around death. I’ve been surrounded by the dead since birth, it doesn’t hold the same mystery and fear for me that it does for most. At the very least, ghosts have given me that wisdom. Life definitely goes on.

It was emotional when the bagpipes began to play, though. There’s just something about bagpipes that calls to the soul. But when the bugler played The Last Post, well, read on.

So, here is the part that got me. As the bugler began to play The Last Post, I leaned forward and asked the woman in front of me its meaning:

She said, “The ‘Last Post’ bugle call symbolizes the ‘end of the soldier’s day’ in so far as the dead soldier has finished his duty and can rest in peace.”

And that’s when I lost it.

I don’t think I’ll ever forget that day, or those beautiful boys. Thank God they’re home and can rest. 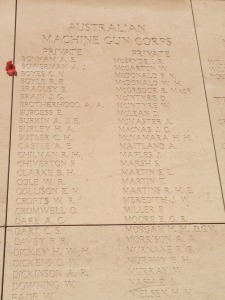 I didn’t know the history of The Last Post. In case you didn’t either, here is a brief bit of its history:

The tradition of the final bugle call of the day signalling the end of the soldier’s day dates back to the 17th century when the British Army was on campaign in the Netherlands. There was already a Dutch custom in existence called “Taptoe”. This was a signal at the end of the day to shut off the beer barrel taps and the name comes from the Dutch “Doe den tap toe” – “turn the tap off”. From that time the British Army adopted a routine of also sounding drum beats as the officer on duty made his rounds in the evening to check sentry posts and to call off-duty soldiers out of the pub and back to their billets. When the bugle call of ‘Last Post’ was sounded at the final sentry post inspection this was the final warning that everyone should be back in their billets.