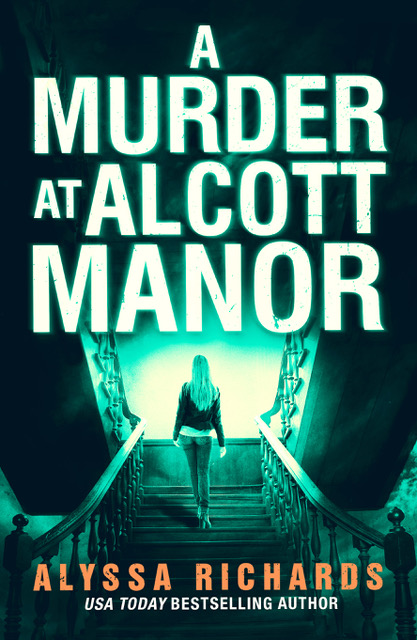 Mason and Layla have waited a long time to be together, but the twisted truth of their past could ruin everything.

Layla’s late husband left her homeless, broke, and with two young girls to care for. When she’s offered a caretaker position at her old manor home, she chooses to overlook the hauntings… and the spot where her husband was killed.

Mason left behind the stress of New York City finance for a simpler life in construction. He hopes the seasonal renovation job will let him reconnect with Layla. They were on the verge of a relationship 10 years earlier, until a brutal murder tore them apart…

When a series of strange happenings bring them together, Layla must tap into the manor’s otherworldly realm to protect them. Mason may be skeptical, but will he believe Layla when she reveals the twisted truth about their past?

A Murder at Alcott Manor is the second standalone book in a series of gripping romantic suspense novels. If you like contemporary gothic settings, supernatural thrillers, and passionate romance, then you’ll love Alyssa Richards’ haunting tale.

Buy A Murder at Alcott Manor to step into the supernatural today!

“A Murder at Alcott Manor” is the amazing second entry in a series that keeps getting better with each book. It’s not necessary to have read the first book to enjoy this one. Each can be read independently, but to enhance the ghostly and shivery delights that are to be found at Alcott Manor, you’ll want to read both books. And I would recommend you do so as soon as possible.

This book contains Layla’s story and suffice it to say, this haunting will make you want to go there and vanquish the ghost yourself. Although you won’t want to do it alone. There’s atmosphere galore and it gave me chills to discover that some hauntings can do real harm and become all too real.

With the Alcott Manor series, Alyssa Richard’s firmly establishes herself as a front runner in the elite field of those who can write believable, creepy and downright shivery gothic horror. I, for one, can’t wait to see what Alcott Manor has in store for us next.” Amazon Reviewer