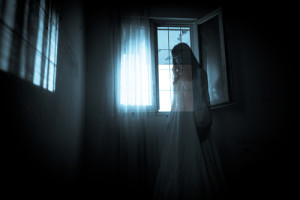 Ghosts are such a fascinating topic, don’t you think? People assign the term ‘ghosts’ to all kinds of spirits – most frequently to the spirits of deceased people. While it is true that all ghosts are spirits, not all spirits are ghosts. Ghosts are a very specific kind of spirit. Ghosts are earthbound souls whose bodies have died, and for many and varied reasons they have not yet crossed over to the Other Side. Ghosts are spirits who choose to remain on the earth plane after they leave their bodies.

Ghosts Are Spirits in Need

Every ghost is in need of something. Sometimes they’ve lost sight of what they need. But all ghosts are spirits in need. And the one thing they need most of all is to find a way forward.

Ghosts are a wonderfully clear mirror of what happens to all of us when we’re too scared to move forward in our lives. We lose our sense of direction, we become less trusting, more afraid, our worst attributes and limiting beliefs become larger than life and nothing gets better until we find a way to face and overcome what frightens us. We become ghosts in our own lives – shadows of our former selves.

Holding ourselves back out of fear of what’s next isn’t a wise approach to life. We may find plenty of reasons to feel afraid in this world, but we all need guidance and trust to help us through them. There are times when giving up and losing hope may seem like the only alternatives, but ghosts show us how these options sequester us in our pain and bring long-lasting suffering that is worse than whatever happened in the first place.

Their staying here beyond their time, mirrors the places in our lives where we choose fear over faith, anger over forgiveness and despair over hope.

Have a ghost in your home? Try to use this experience as a helpful mirror. Take an inventory of your life and look for the stuck places where you may be holding back or feeling too afraid to move forward. Make some positive changes in your life and flow forward.

There’s no guarantee that the ghost will move on after you make those changes. But they might!

Savannah is a very haunted city. Which is part of why I liked growing up there. It was fairly easy to find people who appreciated ghosts and other eclectic phenomenon.

After visiting Georgia and her recently departed husband, Andrew, I made my way over to the other side of town to visit with another childhood friend.

Merrilyn was a favorite playmate of both Alexa’s and mine when we were children. Even though Alexa is a couple of years older than Merrilyn and me, the three of us were nearly inseparable. When Maman would bring us into town so she could visit her friends, attend meetings and run errands, she would let the three of us run around outside in orbit of wherever she happened to be.

We played in the grassy city squares where we often splashed barefoot in some of the city fountains. Though we weren’t supposed to. And because Savannah has so many cemeteries, we often found ourselves playing hide and seek around the headstones of Civil War soldiers.

Today Merrilyn and I strolled through one of Savannah’s older cemeteries. Her chestnut hair danced around her shoulders in God-given curls as she told me about her latest historical rehabilitation project in downtown Savannah.

“We’re refurbishing all of the walls and floors to their original stain colors. Most of the guys doing the sanding and staining were complaining that the house was haunted. They said there were cold spots, weird knocking noises upstairs, voices that didn’t seem to belong to the crew. I’ve had three guys quit already because they said they felt people watching them while they worked. I didn’t believe them until I took this photo and look!”

Merrilyn handed me a photo of one of the semi-furnished rooms of the house and it was covered in orbs. There had to be 100 orbs in the room.

“Oh, Merrilyn,” I exclaimed. “It really is haunted…”

I touched the photo and a vision of a woman in a navy blue, high neck dress came to mind.

“Do you know the history of the building?” I asked.

“Not much of its original history. It was built in the mid 1850s as a private residence. The original owner’s daughter lived there for a while. But no one has lived there since the 1950s. The owner rents it out to tourists and to local people for events. Why? What do you see?”

I told Merrilyn about the woman. “There are fabric covered buttons traveling from the top of the neck all the way to the hem.”

“Could we  go visit later today?”  She asked.  “If we could get her to leave, maybe the rest of my crew wouldn’t quit! I really want to finish this job.”

We turned the corner and I stopped abruptly. A young man in a Confederate uniform was leaning against a tombstone, relaxing. He jumped when I saw him and then he ran off.

“Nothing. Typical Savannah.” I said.

Merrilyn was building her restoration business from the ground up and was working hard to get it going. She had several other homeowners who were interested to hire her. But if she couldn’t keep a crew onsite long enough to finish a job, it would be hard to build a good reputation for herself.

“The owner says he can’t keep the house rented on nights with a full moon,” Merrilyn said as  we walked into the three story pre-Civil War home. Suddenly everything became eerily quiet. As if there had just been a party going on, but now everyone stood quietly staring at us.

“Mind if I start upstairs?” I asked.

“Want company?” Merrilyn sidled up next to me as we climbed up the stairs. She looked nervously over her shoulder into the room now below us. We could both feel the invisible eyes watching our every move.

I followed the trail of the presence of the woman I’d seen. She was expecting me. Ghosts missed nothing.

When we reached the bare, attic-like room I saw the woman in blue staring out the window just under the roof’s apex. She didn’t turn around but I knew she saw me. Her hair was pulled up off of her neck in a long, draped updo and an ornate hair comb tucked at the top.

“Oh, she’s here, isn’t she?” Merrilyn asked. “I can feel her.” Merrilyn rubbed her throat.

I quietly asked the woman in blue why she was here. She ignored me.

“You can’t stay here any longer,” I said. “You’re ruining my friend’s business.”

“Well, he ruined my life!” The woman in blue yelled and immediately her story burst into my head. A handsome dark-haired man on bended knee gave her a mine cut diamond solitaire. When their wedding day arrived, however, she was the only one to show up at the crowded church. He was nowhere to be found. It was finally revealed he had left town with another girl, and the despair was too much for the woman in blue to bear.

“Was this your house?” I asked. The ghost laughed aloud and pointed toward the rafters. Her body swung from one of the lowest boards. Merrilyn was oblivious as she stood below it.

“What an ass,” Merrilyn said as she shook her head.

And the ghost’s energy softened.

Ghosts are everywhere. They’re impossible to escape. Some of us see them. Others don’t. I believe in ghosts. Do you?

Following is an excerpt from my new novel The Fine Art of Deception. Coming Soon!

“It’s dark except for the moonlight coming in through the window behind his back. I lie in my twin bed in my family home, looking out across the ocean of covers, watching the man across the room stare at me. He’s tall and thin with light brown eyes that seem to glow. His thin lips curl back and I feel like prey as he grins at me.
Family are just down the hall, but they might as well be a mile away as paralyzed as I feel.
He’s watching me. Staring at me. Surprised that I can see him, since most people don’t. But he’s not shocked enough to leave. In fact he seems intrigued by the situation.
He doesn’t blink. Neither do I.
I breathe without moving my body, praying for an outpouring of God’s grace to make this man think I’m dead and just leave. I know that if I move, he’ll move. So I remain still.
He’s sick. Disturbed. Obviously lost. Wrong that he should end up in a child’s room at this hour. Or at any hour. He doesn’t belong here anymore. He’s one of the visitors I told my grandmother about. The visitors that find me – most often when no one else is around.

The dream always begins the same way. And at 3 a.m., caught in a deep and powerless sleep, I have no choice but to let it play out.
It has three parts.
First, I’m a child again and reliving my worst nightmare, which is more horrible because I was never asleep when it happened. This time I’m five. But sometimes I’m seven, eleven or even fifteen. The nightmare goes on for years. The players change. The room changes. But the ordeal is always the same.”