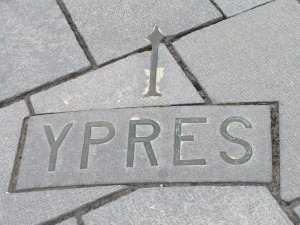 A collector from Brussels purchased several pieces from Blake’s gallery last week. We traveled there together to make a romantic getaway of it, and as a side trip, we stopped in Ypres. Little did I know that I would be starring in ghost stories – World War I soldiers find their way home.

If you’ve never been, Ypres is an extraordinary experience. Ypres was nearly destroyed in WWI and every piece of land is a former battlefield. And, as you might imagine, there are lots of soldiers left behind. Young boys who were 19 over 100 years ago.

We started our visit at Hill 60, a battlefield that lined the Western Front. As I stepped onto the soft green grass, echos of soldiers yelling commands filled my ears. I turned in their direction and saw hoards of soldiers running toward me in full regalia. Rifles drawn but not ready to fire. 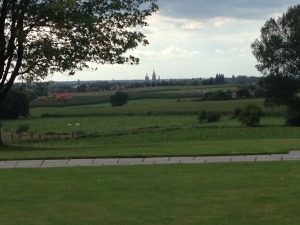 Stranded for more than 100 years, these boys were looking for a way home.

As quickly at they ran to me I guided them to the other side. When one unit crossed over, another charged me and I crossed them over as well.

I had the strangest feeling that I was returning to my friends and brothers, helping those who had been left behind. I don’t specifically remember a past life in WWI. But there are flashes of memories here and there. I definitely felt these men were my brothers in arms. Maybe I had been there.

I stayed with the same process until no one else ran toward me and the area was empty. A silent breeze blew over the hill. And now that all was quiet on the Western Front, I knew it was time to leave.