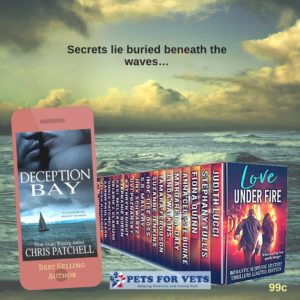 **She’s armed. He’s dangerous. Together, can they stop a killer from tearing a small island community apart?**

When wise-cracking cozy mystery author, Austin Martell, left his hometown on Whidbey Island for the bright lights of New York, he vowed he would never go back. But some promises are impossible to keep, and when Austin discovers that his mother has suffered a serious accident, he has no choice but to return. Austin soon learns that her accident may be no accident at all, and secrets that were laid to rest after his brother’s tragic death off the coast of Deception Bay, have now begun to surface. Austin finds himself in the center of a real-life murder mystery, when Police Chief Ellie Sharpe uncovers a curious connection between the author and the death of a local businessman. Born and raised on Whidbey and trained as a New York cop, Ellie is smart, and tough, and determined to solve the mystery behind the killing before more people die. Sparks fly as the two pair up to figure out who is responsible for the murder. The closer they come to discovering truth, the more desperate someone is to keep the sins of the past from coming to light. Someone close to Austin harbors a deadly truth. Can Ellie unmask a killer before Austin becomes one more secret buried beneath the waves of Deception Bay?