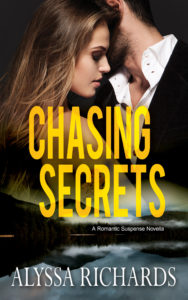 I am so happy to announce the pre-release of my new Romantic Thriller, Chasing Secrets! I’m releasing it exclusively as a part of the 21 Book Romantic Suspense Box Set — Love Under Fire — at a pre-order special of only .99 .

Love Under Fire is made up of a group of Award-winning, WSJ, USA Today Best Selling Authors who have put together 21 Brand New, Never Before Published Romantic Suspense Books!

You can pre-order it here for only .99: on AMAZON

We’re also donating a portion of the proceeds to Pets for Vets, a terrific non-profit organization that supports US Veterans and resuces shelter animals.  Every sale helps a Vet get a Pet!

Today I’m offering a sneak peek of the first chapter of CHASING SECRETS. I hope you enjoy!

Her husband’s secret is priceless. Her attempts to retrieve it could be deadly.

“It is the stars. The stars above us, govern our conditions.”
William Shakespeare

Want to continue the adventure? Easy! Just Pre-Order your 21 Book Box Set for only .99  (Limited time Pre-Order Offer!) on AMAZON or any of these other Retailers: www.Books2Read.com/LoveUnderFire

Her husband’s secret is priceless. Her attempts to retrieve it could be deadly.

Barbara had everything she ever wanted—a successful career, a loving husband, and a beautiful baby on the way. She even had the incredible gift to know everything about a person from hearing their name. But when Barbara’s husband somehow evades her ability and secretly clashes with a ruthless criminal, it sends her whole world crashing down. As if the resulting tragedy isn’t bad enough, now a killer threatens everything she loves to reclaim a valuable cache of diamonds.

To protect her family, Barbara must use her gift and the help of a handsome archaeologist to find the stolen gems before time runs out. If she fails to discover the treasure and finally understand her husband’s covert double life, then her once happy family will never be the same.

Buy CHASING SECRETS to start a diamond of a mystery today!